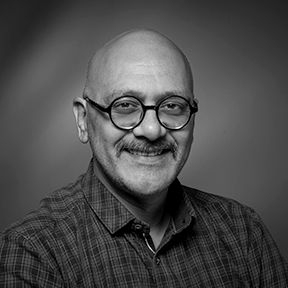 Tarun is Principal Designer in the Graphic Design discipline at NID. He received his (integrated) Masters in Design (Graphic Design) from NID in 1997 and has more than 20 years of consolidated experience in design education, professional design practice, and academic governance. At NID he teaches important courses such as Type Design, Typography, Printing Technology, Illustration, Visual Narratives and Environmental Perception, for both Bachelors and Masters students.

He led his team as founder Head of NID’s Admissions Cell in 2016, to revamp the system, establishing fair, transparent and candidate friendly policies, processes and interactions using cutting edge automated technology.  He has served on several important committees leading to transformative reforms in academics, design research, publications and governance. He has also contributed significantly in setting up the Masters programme in Graphic Design at NID and B.Des programme at Banasthali University, India.He has served as a jury member in several design colleges and design competitions in India and abroad.

His professional projects include socially relevant communication projects for the rural audiences such as, Science textbooks; strategizing behavior change communication relevant concerns such as inclusive design, disability, gender sensitization etc. He has designed more than two dozen publications. He has also designed over thirty logos including Right to Information, and None of The Above (NOTA) for the Government of India. His Logos for the Cluster University of Jammu and Srinagar have been awarded in the 9th WOLDA 2018.

His research interests include Gurmukhi script, Social Behavior and Indigenous Visual Culture. His visual narratives can be viewed on his instagram feed @tarundg